We were approached by Odd Post Entertainment to produce the big screen animations and backgrounds for Global Village, Dubai as parts of their "Dreams" stage show - celebrating the tales of 1001 Arabian Nights.

Our role was to provide the ‘digital backdrop and Genie character’ that would interact with the live action performers throughout the 25 minute nightly show.

For this we needed to design and build a larger than life Genie character that would interact with the on-stage actors throughout the show. We also needed to create five separate landscape scenes that would become backdrops for the show.

All of this content was to be displayed on 3 huge overlapping screens behind the stage so we needed to make sure that everything we delivered was spectacular!!

For the character we needed to come up with a design that would work well in 3D that could also pull off the larger than life expressions usually reserved for 2D characters.

For this we went through a number of variations of shapes and sizes for the client to choose. 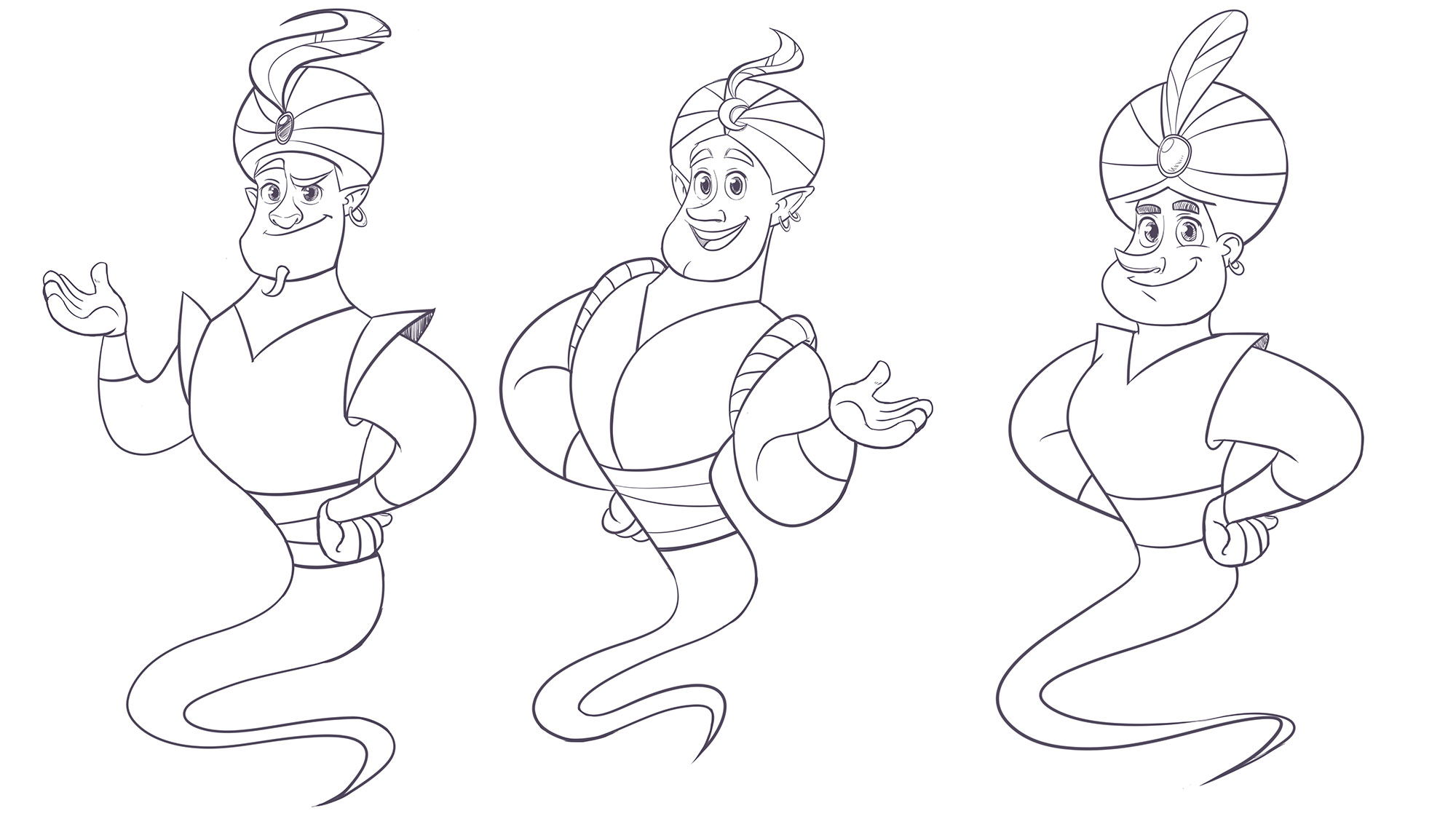 Once we had settled on the style we mocked up a variety of colour options to see which of those would be best. We wanted to get a good mix between something realistic (whatever that would be for a Genie!!) and relatable but also magical.

From these options the more “realistic” tan look won through. We then worked on a number of different outfit options for his final look… 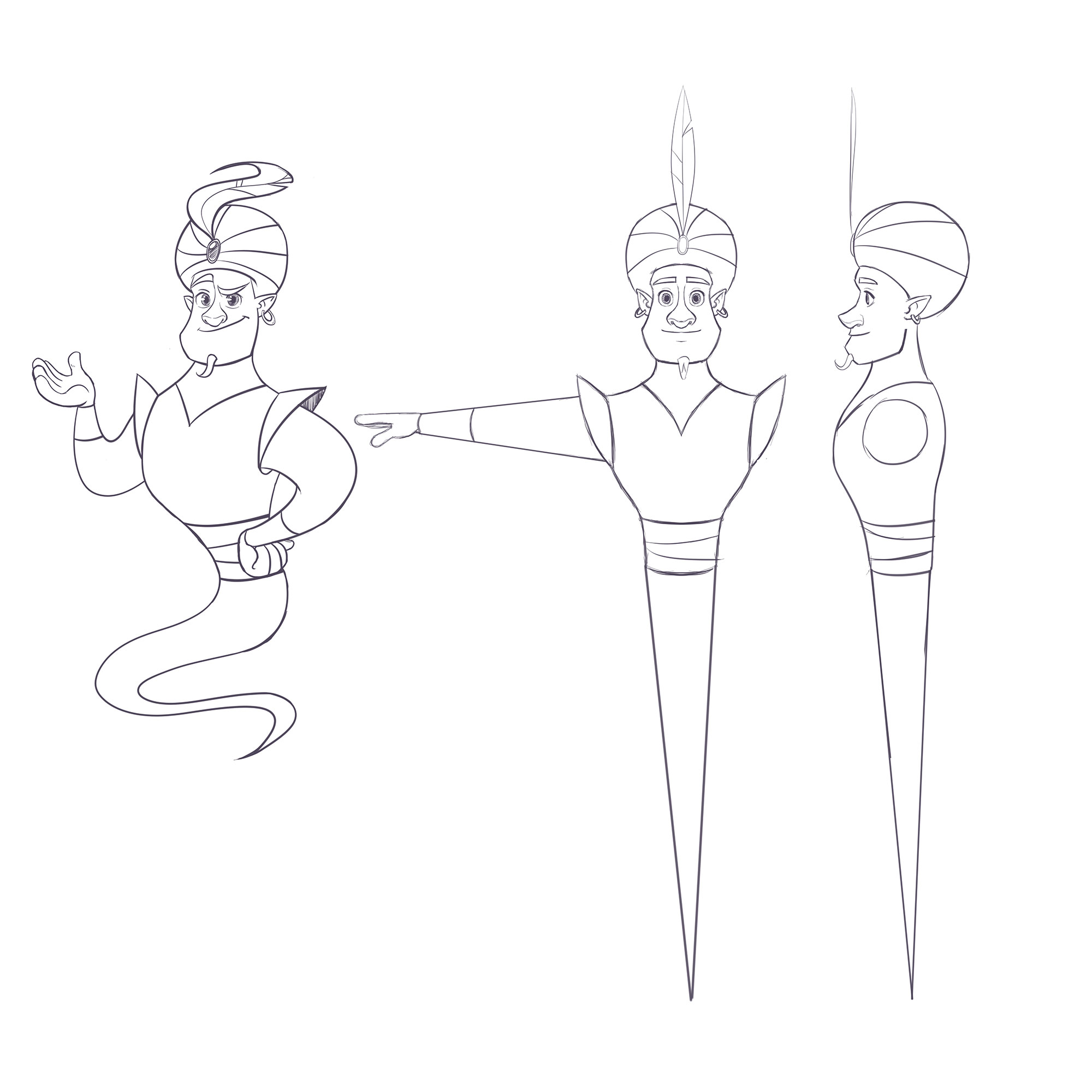 Once we had the character design and look agreed we set to work building him in 3D ready for animating.

Building and rigging him was a bit different to normal as he didn’t have any legs or hips, so we had to improvise a bit when to came to rigging up and placing things around his waist.

We also set to work building the different props and items of clothing that he would need in each scene, creating a full wardrobe that we could mix and match depending on the scene.

As the screens were providing the backdrop to the live action stage production as well as the animated Genie character we needed to make sure that all the backgrounds gave the wow factor and set up each scene for the live action performance.

For this we combined a number of different layers to give a rich environment with a good feeling of depth and detail.

To start the process each background was sketched up in 2D first so we could get an idea of how the scenes would look. Once we had these sketches we could work out parts would be modelled in 3D and which parts would be 2D.

We then used these sketches to create colour keys of each element in the scene so we would have a guide to work to when texturing and setting up the render of the 3D.

To achieve the required level of depth we modelled detailed foreground shapes and props in 3D to give a ‘real world’ feel that the Genie would fit into.

We then built some mid ground props with slightly less detail to give the impression of being further from the audience.

Finally we painted in the rest of the detail in 2D to complement the style of the scene and added some subtle animation to bring the scene to life.

From the script and stage directions that we were given we were able to bring the Genie to life. We wanted to create a larger than life persona for the Genie that would engage the audience and also fit with the dramatic live action performance. We also needed to be mindful that all the Genies actions, mannerisms and gestures had to work well on a large screen where the audience could be sitting some distance from the screen. 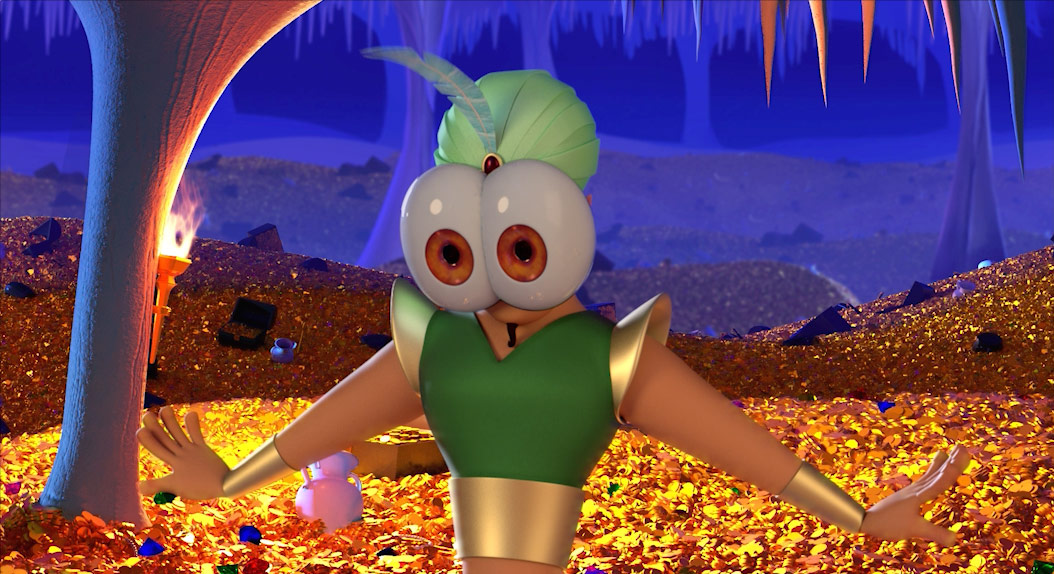 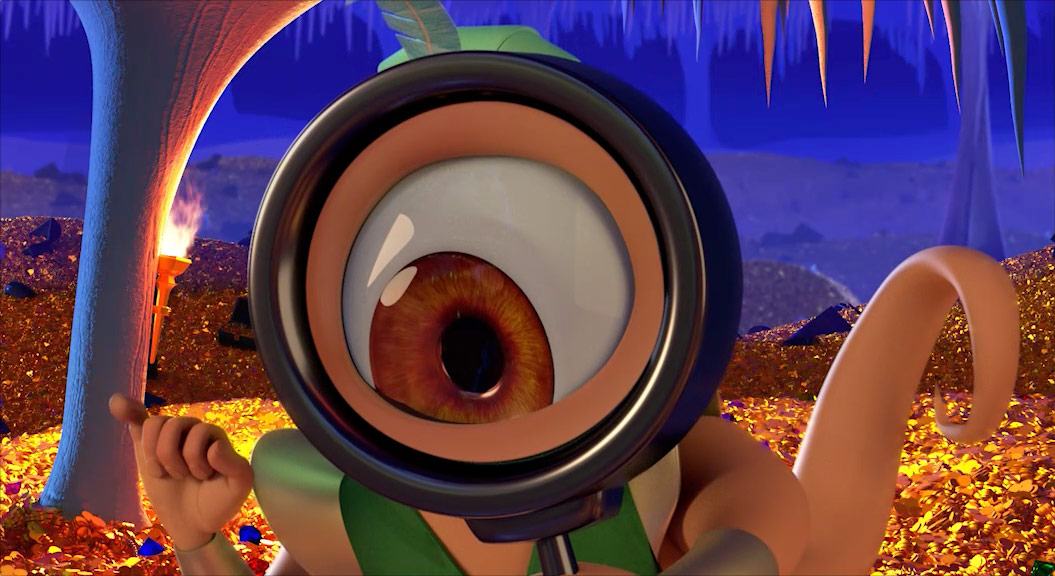 Once we had the idea of the character of the Genie, it was down to our talented 3D animators to bring him to life on screen.

One of the key aspects for the animation was that as the character had a tail, scene composition was very important to make sure that it didn’t pop into the frame and look disjointed. As a result we kept the Genie close to the camera, using medium close up shots as much as possible. This also had the benefit of filling the relevant screen with the Genie, which looked amazing and had great impact during the live show. 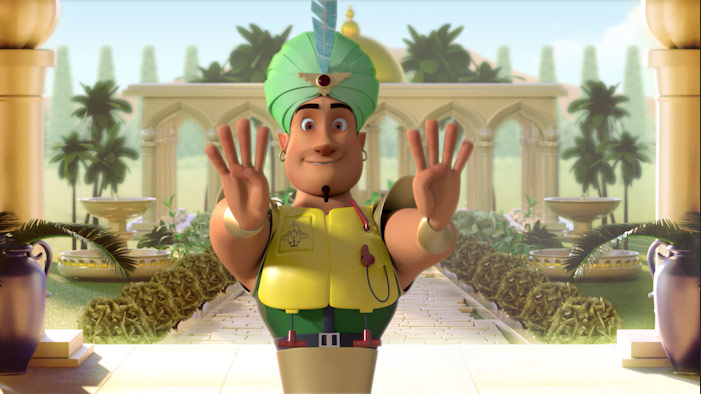 Once we were happy with all the 3D elements we set about adding the rich colours that would bring the environments to life within the render.

We chose Pixar’s Renderman software to render out the scenes as this enabled us to render the large complex scenes quicker and easier on a smaller render farm combined with amazon cloud instances as it uses less RAM than our other render options.

To achieve this Marco, our TD, was able to write the scene geometry into a script format to remove some of the heavier elements of the detailed scenes. For instance in the cave scene the thousands of 3D coins could be written into Renderman’s geometry language so they didn’t need to be in the scene but were added during the render via the script. This produced much smaller output files, which were easier to handle when transferring and compositing.

We were really happy with the outcome of the final rendered and composited backgrounds which we think look really impressive...

Once all the elements had been pulled together and the final music score and Sound FX had been added we had delivered a fantastic and visually stunning animation piece.

By using our years of experience and skills in character design, 3D animation and rendering we were able to produce and deliver this 25 minute animation production for a large screen event that combined seamlessly with the live action stage show.

We are incredibly proud of the outcome and of the team for all their hard work.